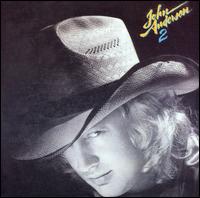 As the title suggests, John Anderson 2, was the singer’s second studio album for Warner Brothers, released in 1981. Produced by Norro Wilson, it picked up where the previous year’s debut album left off, calling on some of Nashville’s premier songwriters and musicians, and stood in stark contrast to the typical Urban Cowboy fare of the day. Among the legendary musicians contributing to the album were Harold Bradley (Owen’s brother), Jerry Reed, and Fred Carter, Jr. (Deana’s father) on guitar, Pete Drake on steel guitar, and Hargus “Pig” Robbins on piano.

The opening track, “I’m Just An Old Chunk of Coal (But I’m Gonna Be A Diamond Someday)”, an instant classic composed by Billy Joe Shaver, was the first single released from the album. It brought Anderson to the Top 5 for the first time, peaking at #4.

It was followed up by “Chicken Truck”, composed by Anderson, Ervan James Parker, and Monroe Fields. This is a light-hearted tune about a motorist who is stuck on the highway behind a truck transporting chickens, which it is unable to pass. It’s my least favorite song on the entire album; the lyrics are foolish, and it has some rock overtones, which make it seem out of place with the rest of the album. It is also an indication of things that were to come in the relatively near future; it’s somewhat similar to 1983’s “Swingin'”, the biggest — and worst, from an artistic standpoint — hit of Anderson’s career. The production on “Chicken Truck” isn’t as obnoxious as the tune it foreshadows, but it wears thin after repeated listenings. Radio programmers apparently agreed; even though it reached #8, this song had a short shelf-life. I don’t ever remember hearing it on the radio, which suggests that it didn’t have any staying power as a recurrent once its chart run was finished.

Fortunately, the foolishness is limited to “Chicken Truck”; the rest of the album is stellar. “Mountain High, Valley Low” is a true gem written by Anderson and Lionel A. Delmore, with stunning bluegrass harmonies. “A Motel With No Phone” is about the singer’s attempt to get away for the weekend so he and his wife can work on repairing an apparently damaged relationship. It’s reminiscent of Merle Haggard’s “If We’re Not Back In Love By Monday”, and would have been an excellent choice for a single.

The highlight of the album is an excellent cover of the Lefty Frizzell classic “I Love You A Thousand Ways”, which was also released as the album’s second single, between “Old Chunk Of Coal” and “Chicken Truck”. I was surprised when I was doing research for this review to learn that it stalled at #54 on Billboard’s country singles chart. I remember hearing it on the radio a lot at the time and thought it was a much bigger hit for Anderson. This is the first Lefty Frizzell song I can remember hearing.

The album closes with the Sonny Throckmorton and Dave Kirby-penned “You’ve Got The Longest Leaving Act In Town”, a beautiful ballad which Anderson sings to perfection.

John Anderson’s contributions to the neotraditionalist movement are often overlooked, perhaps because he changed directions somewhat and began incorporating more pop and rock elements to his music. Or perhaps it is just because his performance on the charts was inconsistent, but John Anderson 2 confirms that he was an important neotraditionalist and every bit as deserving of credit as his contemporaries George Strait and Ricky Skaggs for steering country music back towards its roots.