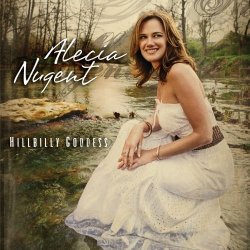 I first heard Alecia Nugent back in 2004, when she released her eponymous debut album. It had some great songs on it, but I must confess that I didn’t really enjoy her singing, which I felt lacked subtlety and verged on the strident. Because of that, I passed on her follow-up in 2006, A Little Girl … A Big Four Lane, and it is only now, with the release of her third album Hillbilly Goddess, that I have rediscovered Alecia.

Her singing has improved immeasurably. Her tone has become warmer and fuller, the stridency I disliked has disappeared, and she has developed the ability to sing with subtlety as well as emotion. Carl Jackson’s production is faultless, and the pair of them have picked some very good songs well-suited to Alecia’s voice and style, which is very much in the country-meets-bluegrass vein.

The change is evident from the first track, the edgy ‘Wreckin’ The Train’, where Alecia gives it some rambling-girl attitude as she refuses to settle down: “I just had to walk away, he would have made a good husband, I guess that’s why I couldn’t stay.”

There is a gorgeous version of Buddy and Julie Miller’s modern classic ‘Don’t Tell Me’, which is imbued with delicately understated emotion, which is perhaps the best exemplification of how far Alecia has progressed as a vocalist. She gives a beautifully understated reading of Tim O’Brien’s regretfully poetic ‘Wishing Hard’: “Sugar just can’t hide the taste of bitterness that you get from wasting a heart that’s full of love but just can’t show it”.

Several of the songs are told in the third person, although they tend more towards snapshots of lives rather than true story songs. Some of them work rather nicely together. The downbeat ‘Just Another Alice’ takes a sympathetic look at aspiring singers “believing they’re a song away from being stars” but really “just another Alice here in Wonderland”. In ‘The Last Greyhound’ an 18 year old girl who might be one of those Alices leaves home to follow her dreams, only to find home is what she really dreams of. A male protagonist learns the same lesson later in life in the mellow-sounding closing track, ‘Already Home’:

“He knew the road like the back of his own hand,
He’d been on it a lifetime, still he wouldn’t call it a friend,
He said, he guessed some people search forever for something they already own,
And he could have saved himself a lot of miles if he had only known”

The joyful title track, co-written by Alecia herself with Jackson and Sonya Kelly, is a light-hearted but at heart, deeply romantic, tale of true love, set to a lively up-tempo tune featuring banjo from J D Crowe. The downhome heroine “may not be a glamor queen”, but to her man, she is the eponymous “hillbilly goddess”. The label should try this irresistible song as a single.

Oh Lord, it’s killing him trying to live without her
When you have to die to get better, it can’t get any worse
This misison of pure self-destruction began when she left
Yes, he started digging his own grave the day that he laid her to rest”

There is more traditional country in the Larry Cordle/Connie Leigh-penned duet with Bradley Walker, an agonised realisation that a relationship is over, because ‘The Writing’s All Over the Wall’. Walker, another fine vocalist who overlaps country and bluegrass, blends well vocally with Alecia, and also offers harmonies on ‘Don’t Tell Me’.

Back in first person, the sprightly bluegrass ‘Cryin’ All The Way To The Bank’, has the narrator finding a literal silver lining when her broken heart inspires her songwriting:

“You see, a girl’s got to live
And it pays to forgive
All you put me through
I ought to be willing –
I’m making a killing
All because of losing you”

It’s a great idea for a song, neatly realized by writers Carl Jackson and Rebecca Lynn Howard and brought to life by Alecia’s zesty vocal.

I also liked the fond reminiscence of Alecia’s childhood travelling around Louisiana with ‘The Nugent Family Band’, co-written by Alecia with Tom T Hall and his wife Dixie.

In retrospect, I think perhaps Alecia’s first album was released prematurely – at least for me. It would have been so easy for me to write her off permanently as someone who might be talented, and acclaimed elsewhere, but whose voice was just not to my taste; I am extremely glad I gave her a second chance, because this really was a delightful surprise. Perhaps I now need to chase up that 2006 sophomore album I missed out on.