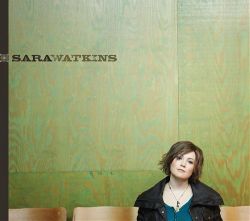 Now, I hear the question coming as you see this post, “Who is Sara Watkins?” Well, I have a simple answer: remember Nickel Creek? She’s the girl — the one who sings in “Reasons Why” and plays the fiddle. Ring any bells? Well, this is the review for her eponymous solo album, Sara Watkins.

My dad has been a huge Nickel Creek fan, so when I discovered their first two CDs last year in our house, I decided to listen to them, and I fell in love with everything. Then I did some research online and found out that they had broken up 2 years previously- a blow to me for sure (I also discovered their 3rd album, the amazing Why Should The Fire Die?, so it wasn’t all bad). My favorite part of Nickel Creek was when Sara sang, so I was very excited to hear that she was making a solo album, especially since the other two members of Nickel Creek have done solo projects: Chris Thile with his various solo albums and exploits, and Sean Watkins (Sara’s brother) forming the duo Fiction Family. It was really Sara’s turn to try her hand at a solo album.

So what kind of album is it? It’s very country-bluegrass, in the vein of Nickel Creek’s first album, Nickel Creek. It also has this relaxed feel, and a kind of throwback vibe, such as on “Any Old Time”. It also just feels effortless and natural, and it’s very calming to listen to. She also has a few instrumentals, “Freiderick” and “Jefferson” where she shows off her fiddle playing, and she is very entertaining. Beyond that, her vocals are very evocative, as usual, and she comes off assured. She obviously knows exactly what kind of music she wants to make, and she makes it well. It’s interesting how well her voice suits these songs, even though she has no twang whatsoever, and her music is much more deserving of the country label than most Nashville acts.

The production and overall mood of this album really enhance everything about it. The quiet dobro on “My Friend” really make it something special, making it sound like a quiet prayer for a friend that’s being overheard by the listener. Sara even shows she can play the ukulele on the cover of Tom Waits’ “Pony”. From what I’ve heard, when she was in Nickel Creek she only wrote one song, “Anthony” from Why Should The Fire Die?, but on this album, 6 of the 12 tracks with vocals were written by Sara. As far as I can tell, she does a fine job at songwriting!

There is one misstep — the song “Too Much”. The song has a nice beat , but Sara stretches her voice in odd ways that come off as annoying and a little immature. Also during “Too Much”, an electric guitar is featured with a glossier production, standing at odds to the rest of the album which has an acoustic feel. However, on the album closer “Where Will You Be”, the relaxed electric guitar fits with the mood exactly and doesn’t detract at all, since it’s more in the background.

Overall, this album really stands out as a cohesive and entertaining album with excellent singing and fiddle playing — a real gem that will probably be overlooked by most people, which is a real shame. It flies by, in a good way, and leaves me wanting more. Here’s hoping she gets another shot at a solo album!