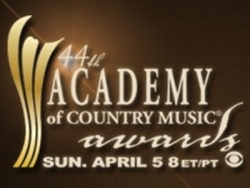 Tomorrow night’s Academy of Country Music awards are on everybody’s minds and lips. Reba will be hosting for the 11th time as the Academy hands out the awards on their 44th annual show.  Here then, is our contribution to the ACM Awards media frenzy.  These are the predictions of the My Kind of Country writing staff.

Entertainer of the Year

Album of the Year

Our choices are pretty spread out, with only Sugarland sweeping their category and getting all 6 votes.  Carrie Underwood comes close in the Female category with myself being the only one who thinks Taylor Swift may take the award.  I would have voted Carrie Underwood in the Entertainer race too, but even after Chesney spoke out against fan-voting last year, he was still victorious, so I think he’ll repeat that victory again this year.  Half of my colleagues think Carrie Underwood will win Entertainer due to the fan-voting in the category – and she certainly has a massive online fanbase.

I think the Album of the Year race is going to be the hardest to call.  Jamey Johnson got in just under the wire as the ACM changed their sales criteria, allowing him to be nominated.  But I think the nomination is all he’s going to get.  Carrie Underwood has been a favorite at this show since her first nomination for Top New Female Vocalist, and has taken home 5 trophies already.  So my vote is for her in the Album category since I think she’s going to get shut out of the Female Vocalist award.  But I could be wrong.  Looking at my track record for predicting awards show winners, you’d definitely think so.

I’m also anxiously awaiting the debut of a new single from host Reba McEntire. The new tune, ‘Stange’ will impact radio Monday. Immediately following Reba’s performance on the show, you can purchase the song from Reba’s Valory Records page. It will be posted for free streaming on cmt.com beginning at midnight (following the west coast broadcast of the show).

I’ll be participating in the ACM Live blog at Country Universe. So share your thoughts with us over there starting Sunday night at 8:00 Eastern time.  Or leave a comment here.