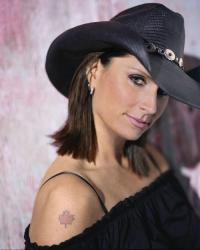 I’ve written about this song on various occasions before in comments on other sites.  But, here is my official recommendation for ‘Nashville Girls’. The track was recorded back in March 2008 for Terri’s album, In My Next Life – scheduled to be released April 29, 2008.  It features guest vocals from Reba, Sara Evans, and Martina McBride.

Steel guitars kick off this clever novelty number all about Nashville girls, how they’ll never go out of style and why they ‘have big hair for a reason’ even imploring them to ‘tease them curls, jack em up to Jesus’.  We all cried when Tammy Wynette died – and Terri admits it here.  And how dare her L.A. friends laugh at that.  So here’s to Loretta, Dolly, Patsy, Emmylou, Jessi, June, Tammy, and all the other fine ladies that made country music great.  How could they go out of style?

The singles from the album, ‘Dirty Girl’ and ‘In My Next Life’ barely cracked the top 40 on the U.S. country charts peaking at #30 and #36, respectively.  However, both did well in Clark’s native homeland of Canada.   The former going all the way to #1.  So, in November 2008, the singer announced she was leaving BNA Records to pursue her career in Canada and hinted at the prospect of creating her own label.  Maybe the song will surface one day on her future albums.  Until then, here’s my recommended track for the weekend.

8 responses to “Just a recommendation …”