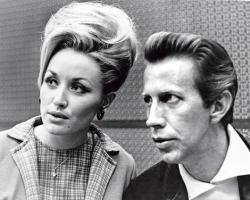 Few things satisfy a country music fan more than when two of one’s favorite solo performers announce plans to go into the studio and record together.  Country music has a long and rich history of producing collaborations with such great chemistry that they threatened to overshadow the solo work of the same artists. Perhaps that’s why we don’t see country music stars pairing up to do duets on a regular basis anymore. Nowadays, Tim and Faith, or Reba and Vince, or Kenny and Dolly, will make guest appearances on one another’s albums but they generally don’t make duet albums anymore – or if they do, it’s a one time or very occasional special event.

Today, a duo is more likely to be two performers that perform exclusively together as an act – i.e., Brooks & Dunn, Sugarland, or Joey + Rory, as opposed to the old days when Conway and Loretta, George and Tammy, and Porter and Dolly regularly released duet albums concurrently with their solo work. Growing up I can remember listening to such classic pairings as Waylon & Willie, Waylon and Jessi, Kenny Rogers and Dottie West, and David Frizzell and Shelly West, in addition to the aforementioned Conway and Loretta, and George and Tammy. And then later, there were duos that collaborated less frequently, like Kenny and Dolly, Travis Tritt and Marty Stuart. Most of the Porter and Dolly duets were out of print and off the radio by the time I got into country music, but when some of their work was finally released on CD, it was like finding a long lost treasure.

Who are some of your favorite duos?

Leave a Reply to Steve from Boston Cancel reply