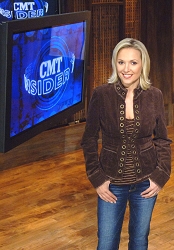 I just wanted to bring everyone’s attention to a special edition of CMT Insider this weekend titled ‘2008 In A Nutshell’.

I tape the show to my DVR each week, and never miss an episode – I am an uber Katie Cook fan. And I think this week’s is the best episode of the show ever. They recount the biggest stories of the year including Dolly postponing her tour due to her boobs, Taylor Swift’s 27-second breakup with Joe Jonas, Shania’s return to the CMAs, and all the other big country music news stories of the year.

This episode also features some hilarious comments from comics Ralphie May (a hilarious guy – you must check him out if you haven’t seen his specials on Comedy Central), Cledus T. Judd, Etta May, and many more. Kudos to CMT for this episode. Be sure to catch it this weekend. It repeats several times, and you can check the showtimes here.